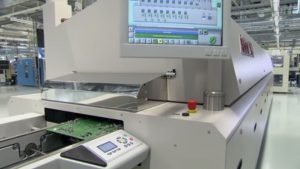 Double-sided PCBA (Printed Circuit Board Assembly) reflow soldering are becoming more and more popular and getting complex day by day.

The main advantages of double-sided PCB Assembly are PCB space savings and lower product costs as compared to the single side PCB assembly.

In every Printed circuit board Assembly certain set of instruction and process are followed.
Normally the fabrication of electronic component was done through robot bases fully automatics machines.
The cost of one line set up is may up to 10 cores bases of machine selections.

The whole Printed Circuit board assembly process can be divided into below steps.

When single side assembly completed the same process was followed for the secondary side fabrication process and all steps are replicated to produce double side assembled the board.
Now come to the point, during the double-sided assembly process the board was passed through the reflow oven on the almost same set of temperature settings that were used in first-time reflow soldering process.
Even after during second-time reflow soldering temperature exceeding melting point of solder paste, the components that are hanging opposite to PCB Surface remain stick-on PCB Surface and do not falling off in reflow oven.

The reason of that can be described as during double-sided assemblies, the solder joints on the top side of the PCB board are inverted and re-flowed again. During the second reflow time, the temperature inside the oven reaches more than the melting points of the solder paste.

But still, components are held in place and do not fall off due to the surface tension, that helps to prevent the components falling off due to the gravitational force.
In other simple words, we can say that the flex was already evaporated due to high temperature during the first time reflow soldering process.
Even getting the higher temperature more than the melting point of solder paste the components still having the sufficient strength and the holding force to hold and prevent them falling off into the reflow oven.

In some cases during re-flowing the secondary  side of a double-sided printed circuit board assembly, it was found  that once the solder is molten, the component may fall off from the weakest of below three locations on PCB Assembly:

Types of Solder Flux | How to Use Flux in Soldering

What is Traceability for the Electronics Manufacturing industry

SMT Insight - November 18, 2018
0
Traceability for the Electronics Manufacturing industry is a Challenge for manufacturers in every industry due to globalization to meet growing customer demand...